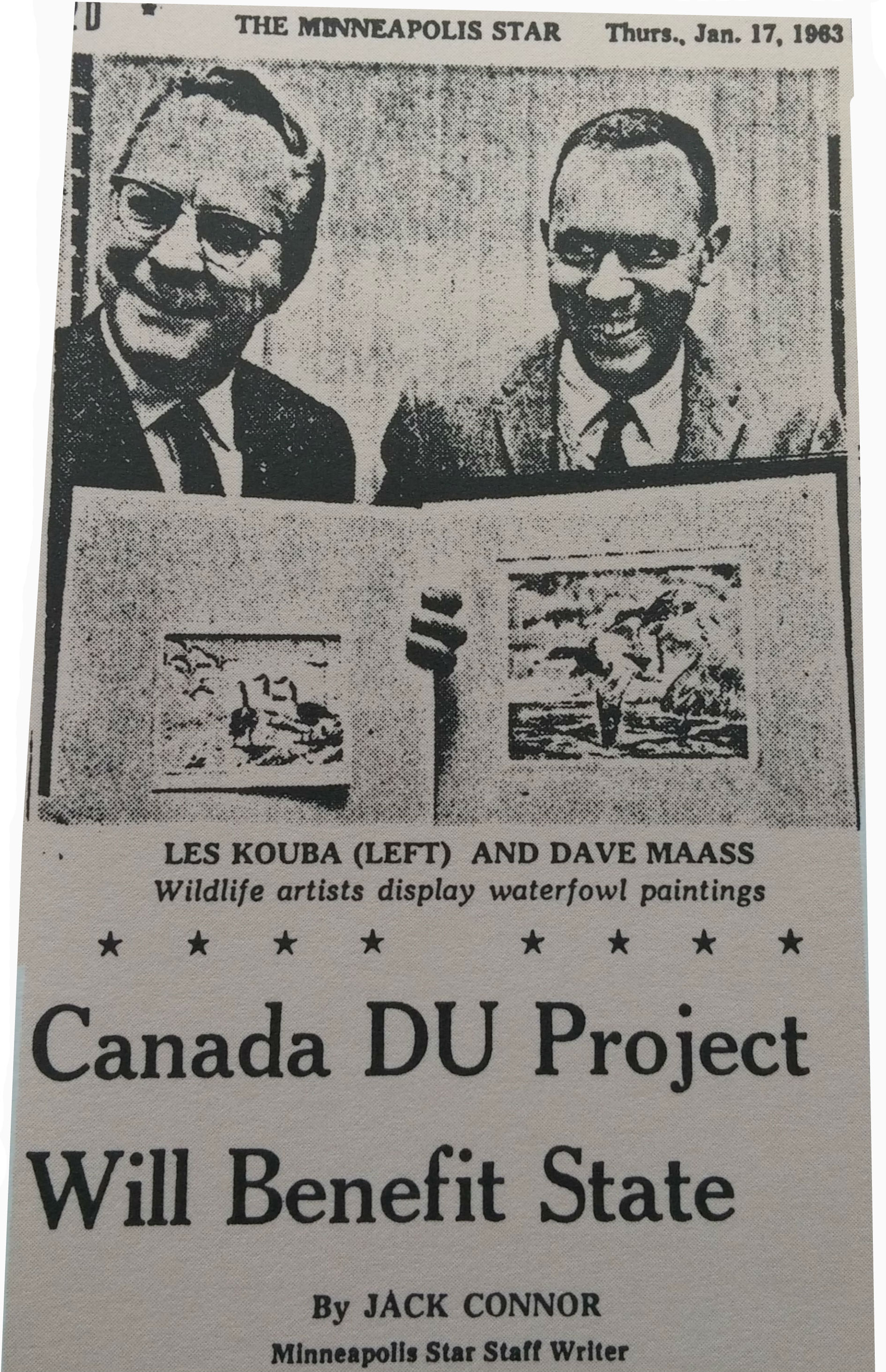 David Maass, one of America’s premier painters of waterfowl and upland game birds, remembers seeing Kouba’s work on the covers of Sports Afield magazine and in the Minneapolis Tribune. “That was years ago,” says Maass, “when I was first getting started as a painter.”

“The first time I actually met Les Kouba was in 1963 at the Minneapolis Club. It was at a Ducks Unlimited banquet. At that time, there were very few DU functions-maybe one or two a year. That was also the first time that I ever saw Les do a watercolor demonstration on the spot in front of a group of people.”

“The greatest Kouba story I have to tell took place at this DU dinner. Les was getting all of his stuff together to do this demonstration-he had all his brushes and paints spread out. You could tell that he was going to have to paint very fast. I felt very sorry for him because I thought, ‘He’s going to have to do this watercolor in front of all of these people.’ I decided that maybe I should offer to help him. I had just met him and we had talked so I felt somewhat comfortable going up to him and asking, ‘Is there anything I can do to help?’ Les listened, and then looked around as he frantically tried to get his stuff ready, and he said: ‘See that,’ as he pointed to his glass. ‘Make sure that it stays full.’ I’ll always remember that.” says Maass.

“Kouba was a showman as well as an artist. I’ve always been impressed with how fast Les could do a watercolor and how comfortable he was talking in front of a group. I think these abilities helped him build his career.”

“When I first started painting, Les always had time for me. I was always so impressed with that. He sold some of my work in the early days. This was in the 1960s. It was a time when it was hard to find a gallery to handle your work. I really hadn’t realized until I started thinking about it what a great mark Les has made on my career.”

“I think Les was a versatile painter, as well,” says Maass. “He was good at watercolors and oils. He could paint a variety of subjects, not only birds, but animals and people, too. I really do admire his work.”

“I also think it goes without saying that no matter who came before Les or who came after-he will always be known as Mr. Minnesota of Wildlife Art.”

Excerpt from The Legacy of Les. C Kouba by Kay Johnson