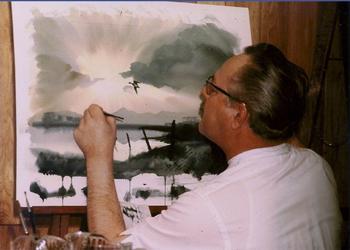 When asked about Les, James A Meger responded enthusiastically, “Kouba is a genius. He’s truly an original. I liken him to a combination of Will Rogers, Jackie Gleason, and Clark Gable. Meld all of those strengths together and you’ve got Les Kouba.”

Merger, winner of the 1980 Minnesota Duck Stamp, the 1986 Minnesota Pheasant Stamp, and the 1986 Alaska Duck Stamp contests, credits Les Kouba as one of the most important people in his life. “Les is the only person, “Merger said, “that I ever focused on in terms of career aspirations.”

“I met him for the first time in the late 1940s. I was just a kid back at that time. I was sitting in the back booth in my parents’ restaurant in Minneota, Minnesota. I was trying to draw a picture of a barnyard rooster when Kouba walked in. He came up to my table and offered to sit down and show me how it was done. He drew the most amazing rooster. I can still remember the detail of the waddle. He put in the texture of the feathers, the flexibility of the muscles-it just amazed me. I said right then and there that I wanted to be an artist just like Kouba when I grew up. Everyone laughed, except Les and me.”

“After that, anytime I came to Minneapolis, I always made a point of visiting Les in his studio. He always gave me a print, but more importantly, he always gave generously of his time. He made everyone feel worthwhile-that’s one of the magical things about Les.”

“I maintained my relationship with Les through the years until my college professor put a stop to my wildlife painting in 1960. Seventeen years after college, when I was 35 years old and had been teaching art for eight years, I decided to start painting wildlife again. I started out by copying some of Les’s work that I had seen in a magazine. After a few months, I took those copies and some of my own original work to his studio. He gave me so much encouragement.”

“I once asked Les, ‘What did you possibly see in my early work?’ He told me he was looking for a feeling that surpassed the technical statement. He didn’t see the skill, but the talent, and that’s why he encouraged me.”

“Looking at my work at the time, Kouba put appraisal prices on each piece. His prices were easily three times what I thought I dared charge. I ended up pricing my work at half of what Les would have charged. I thought the prices were absolutely outrageous, but amazingly enough, everything sold.”

“My whole dream of becoming a wildlife artist came about because of Les Kouba’s belief in me. He believed in me when I didn’t believe in myself.”

Expert taken from The Legacy of Les C. Kouba by Kay Johnson